The State of Utah (Utah) wants to develop about 361,000 acre-feet (paper water rights) of its remaining share of the Colorado River. A portion of this share (86,000 acre-feet) is allocated for the Lake Powell Pipeline (LPP).

There are risks with this remaining share. The water may not be present in the river to use over the long term due to:

Utah officials feel they must hurry to use all of Utah’s Colorado River rights or the Lower Basin states (CA, AZ, NV) will take it; however, Utah may already be using its share because there is less supply.

The State of Utah and the Washington County Water Conservancy District (WCWCD) keep pushing for this LPP project despite its high cost and lack of necessity. Washington County continues to be the West’s most wasteful water user and can do far more to use water efficiently. Washington County’s water use (as of the WCWCD’s June 2019 press release) is 303 gallons per capita per day (gcpd). The national average is 179 gcpd.

To justify the need for the LPP, the WCWCD’s forecast for water demand is artificially high. The WCWCD has used inaccurate and outdated water use data, low cost estimates to build the LPP and low approximations for future impact of water conservation.

Creating a standard to collect accurate baseline data of water use and supply is critical to developing accurate projections of water demand. 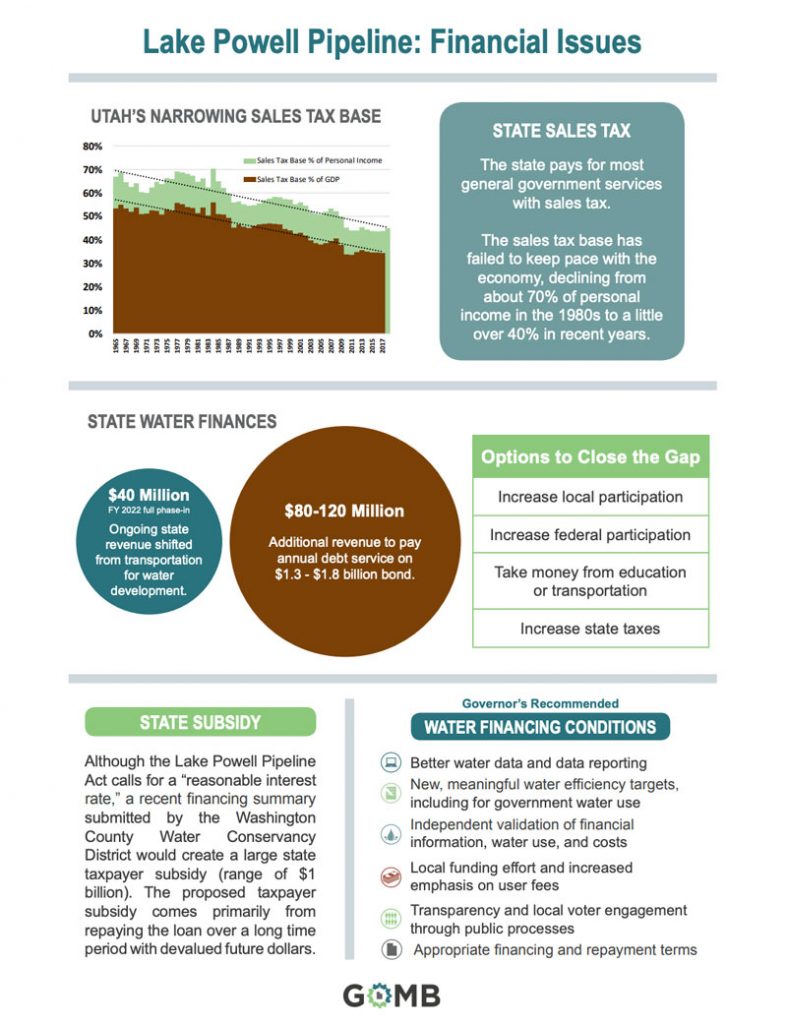 The laws that govern the Colorado River have allocated more water annually than the river produces. This is an economic risk that Utah has ignored and is not addressed in the LPP studies.

Investing billions of dollars and buying into the failing Colorado River Storage Project (CRSP) is not a financial risk worth taking. The State is not considering this economic risk. Using water more efficiently and implementing water conservation measures in combination is the least expensive option.

Initial project estimates in 1995 were $186 million and have now skyrocketed to over billions of dollars. The entire repayment burden will fall on the shoulders of Washington County residents. The residents have a right to know how much they will pay in higher impact fees, surcharges, and property taxes before the Lake Powell Pipeline is approved. With a public project of this size, the lack of transparency is troubling.  These questions are still not answered even though the project has been studied for 14 years and $36 million of taxpayer’s dollars have been spent in doing so.

The WCWCD has also failed to explain how they will be able to pay the high annual payments to the State. The “Performance Audit of the Repayment Feasibility of the Lake Powell Pipeline” by Utah’s Office of the Legislative Auditor General revealed that the Lake Powell Pipeline Development Act does not clearly define repayment to the State and costs could be significantly higher.

Supply uncertainty arises largely from boom and bust cycles of population growth. The financial risks associated with growth forecasts are greater with a single large project. The current approach to the Pipeline project would unduly commit residents to high repayment obligations if demand or costs are  different than projected.

Governor Herbert created the Executive Water Finance Board to study the cost of the LPP. They have determined the LPP is a $1 billion state subsidy with annual payments by the state of $80-120 million that will take funds away from other state needs. Click Here: https://www.utah.gov/pmn/files/444007.pdf.

Under the current plan, every family or business that buys a building permit would pay for the LPP through impact fees. The Water County Water Conservancy District, (WCWCD), assumes that population growth will lead to an increased number of  impact fees; however, to cover any shortfall in impact fees, the WCWCD also imposed a Water Development Surcharge ($1.75 per month) on all residents of cities that signed the Washington County Regional Pipeline Agreement. This surcharge can be increased at any time to protect WCDCD’s bond rating.

According to a 2019 Utah State Legislative AUDIT: Washington County already has the second highest water impact fees in the State. The ability to charge even higher fees is a key assumption for revenue growth to re-pay the State for the LPP.  Planned increases will nearly double the impact fee from 2018 to 2025. A model assumed that the Washington County Water Conservancy District (WCWCD) would carry out its planned increases in impact fees from $9,417 in 2019 to $15,448 by 2026.  After 2026, the model assumes the fee will gradually increase. While it cannot be determined what the highest impact fee will be, it will likely increase once the final cost of the LPP is established.

If construction begins in 2025, using the most conservative estimated project cost of $1.4 billion, the cost grows to $2.4 billion with inflation.

The increased water rates coupled with population growth, rapidly increases potential revenue; however, if there is a recession, this would hamper the WCWCD’s ability to service the debt with the State.

Currently, Washington County’s water rates are 30%-85% lower than other cities in the region.

The third leg of the repayment stool is property taxes.  Since 2018 Washington County property taxes have been raised twice. WCWCD Manager, Ron Thompson, who retired in 2019, planned to raise property taxes to reach the upper property tax levy of .001 by 2030.

Washington County is already struggling to provide affordable housing for many of its citizens. The County is known as a retirement community and has a significant population on a fixed income. Increased property tax increases will put a burden on those who can least afford it.

Southwest Utah is fortunate to have many sources of water that can be developed incrementally as needed at a fraction of the cost of the LPP.

Washington County is not running out of water.  The Water County Water Conservancy District’s report to the credit agency FITCH, in an effort to maintain a high credit rating, states there are many and adequate sources of water within the County. Yet in an effort to justify the building of the LPP the WCWCD did not report all of the existing water supplies to the public and the Utah Legislature.  Two sets of figures are used by the WCWCD depending on the situation or objective: protecting a credit rating vs. justifying building the LPP.

CSU suggests that there are additional supplies which include:

Western Resource Advocates wrote a report, Local Waters Alternative, advocating for measures to be implemented for water efficiency and conservation across all sectors. Many communities have developed a water budget which has led to dramatic water reduction.

Water Management steps that would yield increased water supplies for the future are:

The risks of depending on a water supply from the Colorado River for the LPP is explained in “The Twenty-First Century Colorado River Hot Drought and Implications for The Future” by Udall and Overpeck 2017. Read More Here.

Washington County has some of the highest per capita use and the lowest prices for water in the West.

Collecting accurate water use and supply data is crucial to finding solutions.

Washington County can become more efficient in its use of water by:

The LPP is not the answer and is not sustainable over time. State and County leaders should be pursuing a strategy of making our area more self-reliant by reducing water demand and developing new and unused water resources locally. Vulnerability to reduced flows of the Colorado River, litigation, political conflict, controversy, uncertainty and quagga mussel infestations should not be part of Washington County’s future.

LPP Update FINAL (a summary of the project 2017)

Risks of Depending on the Colorado River APRIL 2019

Lake Powell Pipeline in the News

Impact fees, water rates, and property taxes are the three ways Washington County plans to repay the State for the LPP. The ability of the county to repay using these three sources is based on growth.