Suite of air quality monitors on the north side of the Hurricane City offices, run by the Utah DEQ. Credit: Google Earth

The economic and industrial activity that powers advanced technological societies is the main contributor of air pollution. Fine particulate pollution, or PM2.5, causes significant health problems in cities all over the world. The very worst problems are in China and India, but even the Wasatch Front winter time “inversions” concentrate PM2.5 at unhealthy levels during discrete periods – albeit at far lower levels than those found in Asia.

But will St George and the surrounding communities ever experience the unhealthy levels of PM2.5 that are experienced in northern Utah? That is very unlikely, even with a doubling or tripling of population as is projected over the next 50 years. Why is that?

Another pollutant usually associated with urban areas and most commonly occurring in the spring and summer is ozone. Ozone is not a pollutant that comes directly from tail pipes or smoke stacks but results from complex chemistry involving sunlight and two pollutants that are regulated by air quality agencies; nitrogen compounds (NOx) and organic compounds (VOC). Major sources of NOx are power plants and automobiles. The V in VOC stands for volatile which means that in addition to being a product of burning fossil fuels, VOC can be added to the air through evaporation. Two very different types of VOC that you are probably familiar with are the smell when filling your gas tank (benzene, which is toxic) and the smell of pine trees in a forest (monoterpenes, which are benign). Both, however, play a role in the formation of ozone.

The Landscape of Forever

We believe in celebrating success wherever it is found and one of the more successful efforts of the Clean Air Act has been the Regional Haze rule. This rule was put in place thirty years ago – the last time the Clean Act was amended – to deal specifically with the degradation of visibility in our national parks and wilderness areas. Could the results be improved upon? Sure. Were compromises made in the process? Yes; with interest groups ranging from multi-national corporations, native tribes, government agencies and groups like Conserve Southwest Utah all seeking to have their interests heard, tradeoffs are the cost of progress. The development of scientific tools to understand the causes of haze and the mechanism’s that transport pollutants across vast distances provided the ability to address the problem head-on. This reminds us that negotiated settlements that protect the environment and all of its communities, continue to be possible – even now and the decade that is before us.

In the section above we discussed ozone as a local problem.  Decades ago, ground level ozone was a problem mainly confined to large cities. These days as more research has shown that ozone can cause health problems at lower concentrations than previously thought, there are many more areas in the country that monitor ozone on a daily basis. Ongoing research on the regional transport of ozone indicates that a significant percentage of the ozone concentration at a given location, especially in the intermountain west, comes from elevated background concentrations all across the North American continent. 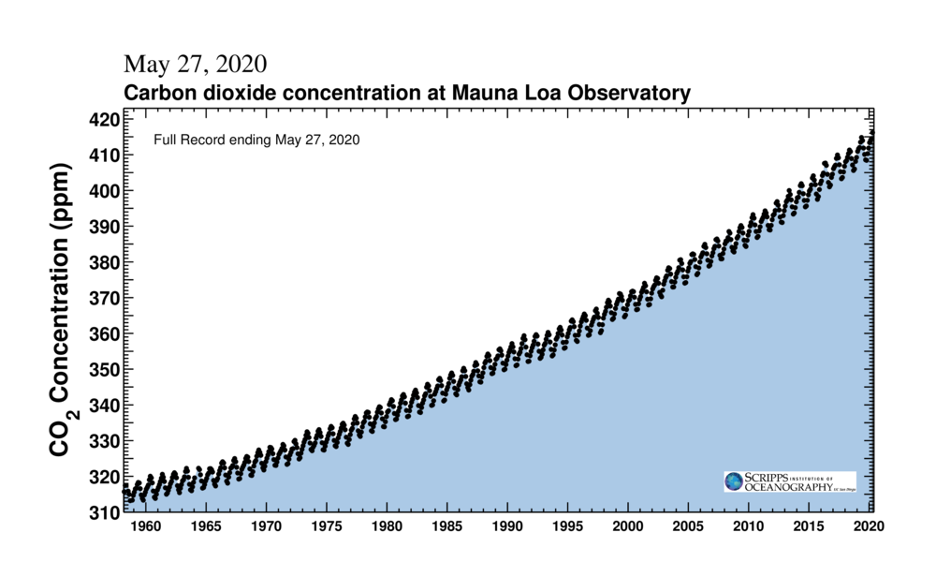 The Keeling Curve, “one of the most important scientific works of the 20th century”

Our most pressing air pollution problem today is the continuing buildup of CO2 in the atmosphere. While the success in dealing with pollution in our national parks is encouraging, one area where the Clean Air Act has struggled mightily is in the regulation and reduction of the climate forcing gases; carbon dioxide and methane.  We are now in an era where we must both reduce the amount of these gases that go into the atmosphere while making plans to mitigate the most harmful effects from those concentrations already there.

We at CSU have partnered with Citizens Climate Lobby (CCL) to focus on national policies to reduce carbon emissions through a revenue-neutral carbon fee and dividend. This policy proposal links raw materials and products that cause C02 emissions to a fee which makes them more expensive than their less carbon-emitting alternatives. This approach uses the free-market to drive innovation of low-carbon materials and products, including energy, while encouraging jobs and economic growth as these emissions are phased out. The fees generated in this approach would be returned in the form of dividends to all citizens.

A recent collaborative effort between the Kem Gardner Institute and Utah state government called The Utah Roadmap seeks creative links between air quality policies, mainly on the Wasatch Front, as a means to simultaneously reduce greenhouse gas emissions as well. The Utah legislature did not ultimately choose to move that effort forward this year but we hope that it will be revisited again next year. While specific proposals to address urban air pollution in St George will likely remain a low priority for Utah air quality planners, we believe there are other creative connections that follow the Utah Road Map approach that make sense for Washington County.

One of the “mileposts” on the Road is a “Smart Growth” approach to new urban development. This approach is typically designed to reduce dependence on automobiles thus lowering the “carbon footprint” of new and existing development.  In southwest Utah, where water quality and availability will become more important in a warming climate. The same smart growth principles that optimize urban mobility can also be designed to lower per capita water use.  By focusing on water conservation goals, we can find ways to support and take part in this important opportunity provided in the Utah Road Map.