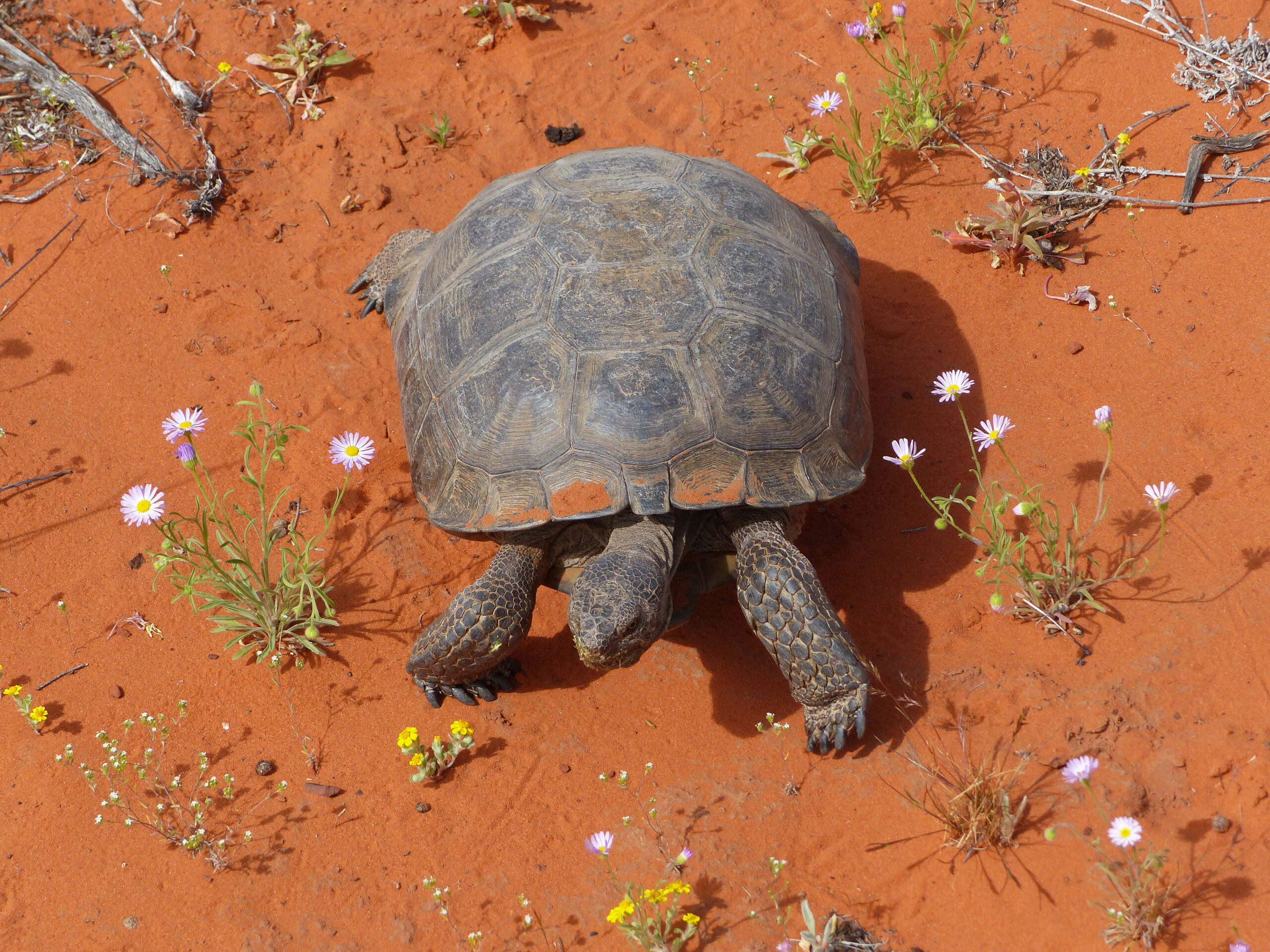 St. George, Utah – Paving over a protected, sensitive, scenic desert paradise in southwest Utah violates bedrock environmental and cultural resource protection laws, according to a lawsuit filed today against the Department of the Interior and the Bureau of Land Management in the D.C. District Court by a coalition of Utah-based and national conservation organizations.

The lawsuit comes in response to the Trump administration’s decision in January 2021to permit  the construction of a four-lane highway through Red Cliffs National Conservation Area. Congress established the conservation area in 2009 to protect popular trails, cultural resources, and critical habitat for 20 species of sensitive and threatened wildlife, including Washington County’s iconic Mojave desert tortoise.

“The decision by the previous administration to approve the Northern Corridor Highway is a clear violation of the National Conservation Area’s purpose and ignores more effective and environmentally-sound transportation alternatives,” said Tom Butine, Board President of Conserve Southwest Utah, the lead plaintiff in the lawsuit. “ If a highway is allowed through this protected land, it means nothing can be protected.”

“It is inconceivable that Secretary Haaland would support and defend the Trump Administration’s decision to punch a highway through the Red Cliffs NCA and Mojave desert tortoise critical habitat, ” said Todd C. Tucci, Senior Attorney for Advocates for the West, which is representing plaintiff conservation groups. “If Secretary Haaland follows President Trump’s lead, she will undermine not just the Red Cliffs NCA but the integrity of each and every National Conservation Area nationwide.  A National Conservation Area is no place for a highway.”

“A wildlife extinction crisis exists in Washington County, Utah and tens of millions of taxpayer dollars have been invested in the National Conservation Area for the conservation of the threatened Mojave Desert Tortoise and preserving biodiversity,” said Bill Mader, first Administrator of the Red Cliffs Desert Reserve and former smokejumper. “Recent wildfires devastated nearly 25% of desert tortoise habitat within the Conservation Area. The selected route for a freeway through the National Conservation Area will turn it into a wildfire tinderbox. It makes no sense to have spent millions of dollars to save tortoises and the biodiversity they depend upon, to then turn around and build a freeway that destroys the population,” said Mader.

“As a fine artist I draw inspiration from the Red Cliffs National Conservation Area,” said Carol Bold, an award winning artist, mother, and outdoor enthusiast who has deep roots in Southwest Utah. “It is a place of solitude, of inspiration, of refuge and of life to a never-ending array of flora and fauna. There are not a lot of places left in the country with this kind of access to outdoor recreation, backcountry trails, and wilderness right out the backdoor. To remove access to such amazing places is essentially bleeding this area dry of one of its most treasured resources.”

“I couldn’t live with myself if I didn’t do something to raise awareness about the devastating plan to build the Northern Corridor Highway,” said Pierce Kettering, 21-year-old mountain biker and marketing professional who hosted a petition to stop the Northern Corridor Highway that garnered 800 signatures in two weeks. “It’s easier not to care. But I know that there are many people who, like me, want to make a difference in our community and are working to save the Red Cliffs National Conservation Area.”

“Our business is inspired by what we understand to be intrinsic values of desert living,” said Holly and Spenser Snow Canada, St. George business owners, trail runners and volunteer land stewards. “Consider the tortoise: it moves slowly, appreciates each drop of water, survives and thrives while conserving its resources. If we construct highways through sensitive land as if it’s an infinite resource, we won’t have a tortoise to learn from. We won’t have desert wildflowers to inspire us. We won’t have the calm, quiet solitude that can only be found in the desert. The next generation of small business owners will no longer dream big and aim for the stars—because unfortunately, they won’t be able to see them.”

The Bureau of Land Management analyzed transportation alternatives outside of Red Cliffs NCA and found that those alternatives more effectively relieve traffic congestion and protect wildlife, scenic beauty, and local access to trails. One alternative, the Red Hills Parkway Expressway, would allow cars to travel east-west across the northern St. George metropolitan area, connecting Red Hills Parkway directly to I-15, enabling it to flow around congestion points while also improving flow through those congestion points. Another improves traffic flow through congestion points while also improving business access and the pedestrian experience in downtown St. George.

“Alternative routes exist that are a better use of taxpayer money, better at protecting our desert paradise, and better at supporting this economic engine for the county. We hope this administration will do the right thing and reverse course,” said Butine.

See below for additional statements from plaintiffs in the lawsuit:

Danielle Murray, Senior Legal and Policy Director at Conservation Lands Foundation “Paving over this desert paradise violates several environmental protection laws and puts each and every National Conservation Land throughout the country at risk of unlawful development and other damaging activities. We want the administration to uphold the congressionally-mandated protections for Red Cliffs National Conservation Area, which does not include construction of a four-lane highway.”

“The Red Cliffs National Conservation Area is a place where people come from across the nation for the abundance of recreation opportunities and to enjoy the outstanding natural and cultural values of the area. Paving a highway through the NCA makes no sense and is counter to the legislation that set it aside as a conservation area to begin with.”

“The ecologically-rich Red Cliffs NCA was specifically set aside by Congress for conservation purposes, including the protection of the desert tortoise whose suitable home across the Southwest is disappearing at a rapid rate. If federal public lands with this kind of clear, sturdy intent for preservation of natural resource values and imperiled wildlife habitat can be paved over for more development on a whim, what areas will be left?”

“With its decision to permit the Northern Corridor Highway, the Bureau of Land Management bowed to pressure from local politicians obsessed with growth, rather than abide by Congress’s clear command to protect the Red Cliffs National Conservation Area for current and future generations. BLM chose to set off additional sprawl rather than protect the Red Cliffs dwindling tortoise population, recreation assets, and scenic values.”

“The Northern Corridor highway has no place in Red Cliffs National Conservation Area.  The highway will pave over some of the best habitat for the Mojave desert tortoise in the region. By filing this lawsuit, Defenders of Wildlife continues its defense of this remarkable animal that is tragically trending towards extinction, largely due to projects like this one that destroy its habitat.”

Randi Spivak, Public Lands Program Director, Center for Biological Diversity
“This illegal plan to pave over prime wildlife habitat that taxpayers spent millions to preserve would set a dangerous precedent. Encouraging urban sprawl by plowing a highway through some of the last remaining habitat for threatened Mojave Desert tortoises makes a mockery of public lands protection.The Biden administration can show it truly cares about preserving the natural world by not abandoning this spectacular place and these fragile animals just to build another freeway.”

Red Cliffs National Conservation Area overlays the Red Cliffs Desert Reserve and is collaboratively managed by the Bureau of Land Management, the State of Utah, Washington County, and other municipalities. The Reserve was established in 1996 as part of a “grand compromise” to protect 62,000 acres of public lands for the Mojave desert tortoise (listed as “threatened” under the Endangered Species Act), while opening 300,000 acres of state and private lands for development. The NCA was established in 2009 by Congress to strengthen the protections.