Meeting our transportation needs without the Northern Corridor Highway

CSU at the Dixie Transportation Expo 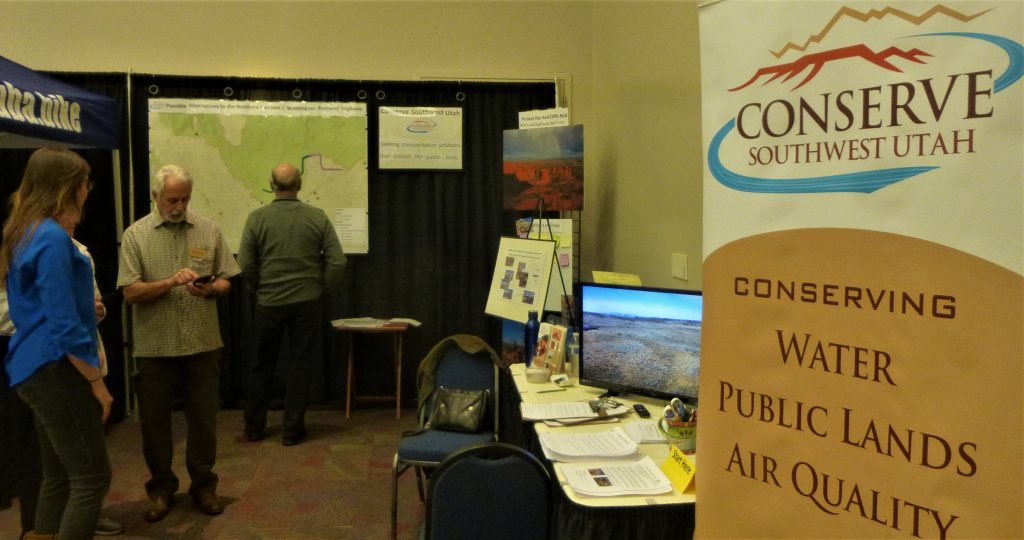 Over 600 people attended the Dixie Transportation Expo on February 12th to learn about the future of transportation in Washington County, including controversial projects like Washington City’s Mile Post 11 interchange, the Washington Parkway and the Northern Corridor Highway that would fragment the Red Cliffs National Conservation Area (NCA). Conserve Southwest Utah provided outreach on the values of the Red Cliffs NCA, the threat posed by the proposed Northern Corridor Highway and potential solutions.

A few booths down, the Dixie Metropolitan Planning Organization (DMPO) displayed two large televisions running simulations of 2050 traffic levels with and without the proposed Northern Corridor. Pixelated gray and red cars clogged roads on the screen modeling the no-Northern Corridor scenario, suggesting the inevitability of gridlock and need for the corridor. CSU has asked for data that feed these simulations, but have yet to see that information. Many who watched the simulations were prepared with great questions they had first considered at CSU’s booth:

CSU’s package of possible transportation alternatives attempted to address the DMPO’s top concerns: congestion at Green Springs Exit 10 and St. George Blvd. Exit 8, and smooth east-west traffic flow across the county. Our grassroots alternatives were well received, because they reduce traffic while protecting the Red Cliffs NCA and the Mojave Desert Tortoise critical habitat, recreation, tourism and quality of life that the land supports.

Alternatives fell into two categories: those catering to the traditional, vehicle-centric model of transportation and those focusing on multi-modal and active forms of transportation that move people, not vehicles. A combination of both approaches will be necessary to meet Washington County’s transportation needs in the future.

It’s important to remember that transportation needs are linked to the way cities grow. When rapid development drives infrastructure needs, the system is out of balance and must be corrected. Implementing Vision Dixie Smart Growth principles in our cities would make multi-modal and active transportation a reality for more people.

It is essential to analyze routes outside the Red Cliffs NCA that could solve Washington County’s traffic problems. The Red Hills Parkway flyovers are one of eleven possible transportation alternatives that CSU believes could help.

Conserve Southwest Utah is a grassroots organization made up of local residents who are passionate about protecting our public lands for present and future generations. We are not professional transportation planners or traffic modelers, but we are engaged citizens with diverse backgrounds which include engineering and planning, and we can see that the county has not been transparent in how it arrived at the Northern Corridor as the “right” solution to traffic congestion. In fact, this very road was rejected several years ago in a study.

Multiple requests for a technical review of the transportation model and the proposed Northern Corridor/Washington Parkway highway have been ignored. We seek this technical review so that we can understand the constraints, conditions, assumptions and inputs to the model in order to more effectively suggest and analyze transportation alternatives outside the NCA.

We will continue requesting a technical review and advocating for meaningful opportunities for the public to engage in the transportation decisions that impact so many facets of our lives. In the meantime, we will offer the best grassroots transportation alternatives that we can for consideration by the public, local elected officials and planners.

Potential Solutions Outside of NCA.

See video of the highway :

The proposed Washington Parkway extension from I-15 to Green Springs Drive is being considered as well. 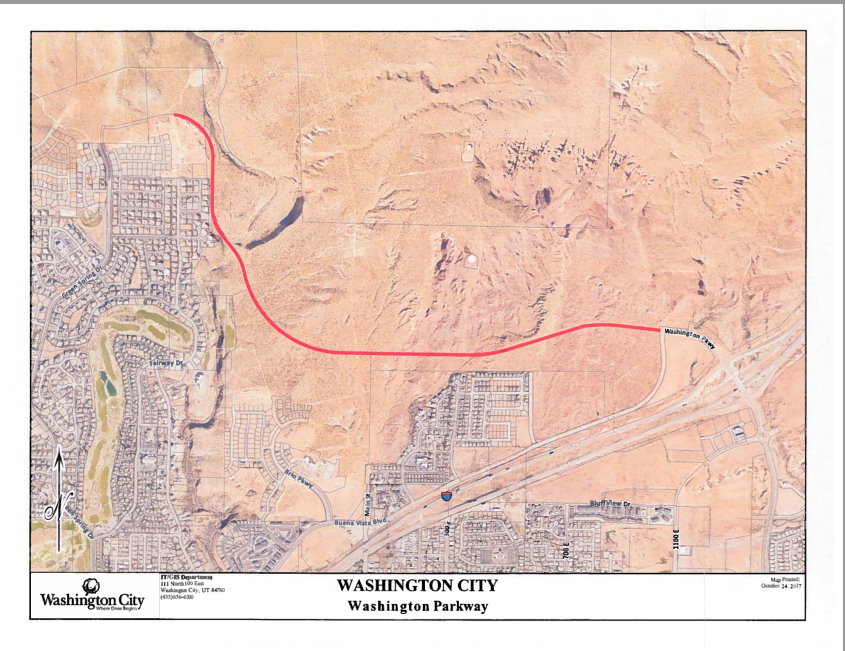 “WASHINGTON CITY —As a part of plans to connect Washington Parkway to the northern end of Green Springs Drive, an open house was held Thursday in Washington City to take public input on the project.

“We’re always worried about Green Springs (Drive) and Telegraph (Street) at Exit 10,” Shaw said. “This gives another way at the top of Green Springs for people to get out on the interstate. We’re really just trying to help the traffic there.”

The first phase of the build will feature two lanes of traffic in either direction and a 22-foot wide center median, Shaw said.

Future improvements to the roadway will be added by developers as the area grows.

“It gives people a chance to give their opinion on the parkway and what they would like to see,” said Mike Shaw, Washington City’s public works director.

The project has been in the works for a while, with $4.2 million in funding gained through the Dixie Metropolitan Planning Organization over the last year. The overall project is estimated to cost $6 million.

The route for the Washington Parkway extension has already been cut though the area and graded by the city. People currently use it a dirt road, Shaw said.

The Washington Parkway-to-Green Springs Drive extension will also serve as the eastern connection point to the pending and contested northern corridor through the Red Cliffs Desert Reserve. The establishment of the corridor is currently the subject of legislation in the U.S. House and Senate.

If all goes well, the city may be able to put the project out to bid in the near future, he said.”

Steward’s House Bill HB 5597 and Lee’s S3297 Senate Bill died at the end of 115th Congress. But, local officials are still pushing hard for the highway. Read more information on highway below.

HR5597 and S3297, the House and Senate bills proposed by Washington County to force the Northern Corridor highway through prime tortoise habitat in the Red Cliffs National Conservation Area (NCA)/Reserve died with the end of the 115th Congress.  Thanks to all of you, our members, supporters and allies who helped stop these bills.  It took two trips to Washington DC and many letters from you. We can take heart from this success, but there is still much work ahead to protect the threatened tortoise and the Red Cliffs NCA.

Washington County has now requested a right-of-way for the highway through the normal process provided by the National Environmental Protection Act (NEPA). This gives all of us a chance to weigh in on the highway corridor during the required public comment period.  It also gives us time to work closely with our elected officials to find a shared solution that works for all of us.

Bills that were proposed for highway though the NCA but failed to pass congress.

Senator Orrin Hatch introduced a bill in the senate May 2017, directing BLM to scrap its excellent RMP that took 4  years of study and many opportunities for public comment. This is because the RMP does not allow a four lane highway to plow through the reserve. This bill died due to a new session of Congress.

Representative, Chris Stewart’s bill H.R. 2423  was introduced May 2017 and it is called the Washington County, Utah, Public Lands Management Implementation Act. To implement certain measures relating to management of Washington County, Utah required by Public Law 111-11. But, the claim the highway was in the Public law 111-11 is untrue and the title of bill is very deceptive. It was not in the 2009 bill and in fact was deleted from the bill by Utah’s Senator Bennett in 2008. It is unfortunate that the public is being told otherwise. Stewart’s bill passed a house committee, but never went to floor vote of the full house and it never allowed public comment before it was introduced. This bill died due to new session of Congress.

It would mandate an unnecessary and damaging highway through a protected wildlife preserve in violation of the Habitat Conservation Plan (HCP) and the Endangered Species Act. It would destroy the purpose of the HCP to recover the desert tortoise.