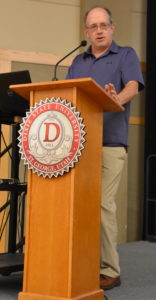 I’ve been a conservative for as long as I can remember. Even as a 13 year-old—way back in 1976—I favored Ronald Reagan over Gerald Ford. I remember staying up past my bedtime to watch the primary results come in. After that, I did volunteer work for all of Reagan’s presidential campaigns.

I also campaigned for North Carolina Senator Jesse Helms, and in college, for South Carolina Senator Strom Thurmond. I don’t know how familiar you are with them, but you’d have to work pretty hard to find someone to the right of those two.

So my conservatism runs deep, and it is largely rooted in my Christian faith and my firm belief in our nation’s founding principles.

The organization I run, Conservatives for Responsible Stewardship, is pretty much what the name says, an organization of conservatives who are committed to being good stewards of the environment and this nation’s natural resources.

It is no accident that conservatism and conservation are both derived from the same root word. As President Reagan once rhetorically asked, “What is a conservative after all, but one who conserves?”

Many people—including folks on both the left and the right—are under the impression that protecting our environment, including federal public lands, is primarily a liberal cause.

Well, more than a century and a half of American history begs to differ.

Going all the way back to Abraham Lincoln, who was the first to protect Yosemite Valley; conservatives have been leaders in safeguarding the environment and preserving our nation’s natural heritage.

Theodore Roosevelt, of course, was one of America’s greatest conservation presidents. He is responsible for most of our national forests, for our wildlife refuge system, for protecting the Grand Canyon and so much more. President Taft, Roosevelt’s successor and also a Republican, protected what is now Zion National Park, which is just up the road.

And President Reagan, who never gets credit for any of his environmental accomplishments, signed 43 wilderness bills into law designating a net total of 10.6 million acres.

And the Antiquities Act, which gives the president authority to establish national monuments, is not the spawn of Satan as Congressman Rob Bishop believes. He has called it the “most evil act ever invented.”

No, it was actually crafted by a conservative Republican, passed by a Republican Congress and signed into law back in 1906 by Theodore Roosevelt.

I could go on, there are many other examples, but you get the idea.

These accomplishments were not pursued as part of some liberal agenda; they reflect genuine conservative values.

I’m referring to values that are the very foundation of conservative thinking, such as prudence, reverence, personal responsibility and intergenerational equity. All of these values are manifest in the principle of stewardship.

In talking about the need to protect America’s spectacular landscapes, President Reagan said:

“This is our patrimony. This is what we leave to our children. And our great moral responsibility is to leave it to them either as we found it or better than we found it.”

Today, many of the loudest voices on the political right are actually much more libertarian than conservative. And they are far too willing to subordinate conservative values to what they perceive as their short-term self-interest.

I often say that libertarians on today’s political right are more philosophically aligned with 1960s “if it feels good, do it” liberalism, than they are with authentic conservatism.

Russell Kirk, a very influential conservative writer whom Reagan dubbed “the prophet of conservatism,” went a tad further, proclaiming that “the Devil was the first libertarian.”

But our views on public lands and natural resource policy are informed by factors beyond political ideology.

One of these is where we live. If you live in the West, where you have an abundance—some might say overabundance—of public lands, your public lands glass is more than half-full. It makes sense that some Westerners have come to believe the adage “less is more.”

For those of us who live in the East, the Midwest, or Texas, our public lands glass is more than half-empty. We struggle to find good public places to hunt, hike, camp, or even play team sports.

In most suburban areas, pretty much any open space that is privately owned eventually gets sold and developed. People in those areas understand that once open space is lost, you almost never get it back.

The house my family lives in used to be surrounded on three sides by forest. That was until the farmer on one side sold his property to a developer. Now on that side we get to look out on a huge white McMansion.

In Texas, where 96 percent of the land is privately owned, if you want to go hunting, you will most certainly have to pay a private landowner for the privilege.

So it also makes sense that people from these areas are quite adverse to losing public lands, or seeing them diminished.

Within the West, you often see a similar dichotomy between urban and rural viewpoints.

It is like the parable of the blind men and the elephant. Their opinion of what it is they are touching depends on what part of the elephant they touch.

Well intentioned people can differ as to what combination of public land policies get us to a proper balance. However, those differences are much easier to work through if we are able to disagree without being disagreeable.

It is just plain wrong, and usually counterproductive, to demonize people because their life experience has led them to different views and priorities than your own.

Unfortunately, not everyone is willing to compromise.

Probably the biggest polarizing force when it comes to public lands are strong-willed individuals who see public land protection as contrary to their own self-interest—and who are quick to use demagoguery to get their way.

Look at the history of even America’s most iconic and celebrated national parks and you will find people who fervently fought against them.

Wyoming politicians and ranchers fought the park for decades. There were armed protests and the governor threatened to kick the park service out of the state.

Opponents claimed that the park’s establishment would bring economic ruin to the region and destroy recreational opportunity. A syndicated newspaper columnist named Westbrook Pegler took the rhetoric a step further, comparing the park’s expansion to Hitler’s annexation of Austria.

Of all the phrases that come to mind with respect to Jackson Hole, “economic ruin” is certainly not one of them.

The town of Jackson, which gets between 3 and 4 million visitors a year, is thriving. Unemployment is below 3 percent and the median household income is over $64,000 per year—far better than the national average.

I think it would be very hard to find people in Jackson Hole today who oppose the creation of Grand Teton National Park. And as best I can tell, even those who once fought the park’s establishment eventually became supporters of park.

In hindsight, all of that angst and ill will seems kind of crazy.

One thing that is worth keeping in mind is that no matter where you live, the amount of federal public land has remained relatively unchanged for 170 years. These conflicts are not about any threat to private property, they are about how best to manage land that we collectively own, land that has been collectively owned since it was first acquired by the United States.

So for everyone who calls the West home, these public lands are part of your heritage. The same was true for prior generations who lived here.

My guess is the wide-open spaces, the scenic views, the recreational opportunities, that result from having this abundance of public land play a big role in why folks choose to live here—in who they are, in what they like to do, and in their quality of life.

If that is true, then radical attacks on these lands like the Utah-based public land transfer push should scare the bejeebers out of anyone who, you know, kind of likes things the way they are. Those who support the transfer idea are promoting very dramatic change.

If large chunks of federal public lands are transferred to states, history and budget realities leave little doubt that many of those lands would be sold, or leased long-term to private interests.

Utah was granted 7.5 million acres of land at statehood. Less than half of that remains today. Next door in Nevada, that state was given 2.7 million acres, yet the state now owns a meager 3,000 acres. California is another state that has liquidated most of the land granted to it at statehood.

Because every state—well, every state except Vermont—is required to balance their budgets, it would be near impossible for Western states to manage public land acreage on such a scale—especially given the enormous cost of fighting wildfires.

Those peddling this transfer scheme also ignore that federal public land belongs to ALL of us, and surrendering it to individual states or private interests would strip most Americans of this shared asset.

“People live in Idaho because they love their public lands.”

Then he told a cautionary tale about 30,000 acres in Idaho that had historically been available for public use. It was recently sold to two billionaire brothers from Texas who immediately put up fences and no trespassing signs. Not only did local hunters and anglers suddenly lose access to that particular 30,000 acres, they lost the principle access route to lands beyond.

The billionaire brothers, Farris and Dan Wilks, have expanded their Idaho holdings to 172,000 acres—which also include popular ATV routes. All of that is now off-limits to the public. The Wilks have also been buying up huge tracts of popular hunting lands in Montana for their own exclusive use.

We should also keep in mind that this dynamic Simpson spoke of is supercharged when that landlord is trying to balance the needs of many stakeholders with competing interests—while also trying to ensure the log-term health of the resource.

America’s amazing public lands currently belong to you and me. They are part of our heritage, a great endowment left to us, to our children, and to theirs. Americans from across this nation have enjoyed, cared for and invested in these lands for more than a century.

Even though we may disagree at times on how they should be managed, I agree with Reagan that we all have “a great moral responsibility” to be good stewards of them.

This is where we hike, fish, hunt, camp, ski, ride and paddle. These lands are part of who we are, and once lost, they are gone forever.

Safeguarding them the best we can is the only conservative path forward.

An Article about preserving our National Monuments. Click here:Preserve our Public Lands