Conserve Southwest Utah had a three-booth presence at the Earth Day Celebration in Springdale on April 22nd.  Twelve new members joined CSU after stopping by our booth.  Welcome!  Also, more than four dozen people signed the Constituent Comment Letter at a booth co-sponsored by CSU and Citizens Climate Lobby, which is a non-profit, non-partisan grassroots advocacy organization focused on national policies addressing climate change.  The Comment Change Letter provides constituents the opportunity to share their concerns with members of Congress.  CSU board and members, along with CCL volunteers, staffed this booth.

Our third booth was staffed by CSU volunteer and native plant aficionado Norman Anderson, who gathered contact information from thirteen people interested in reactivating the Southwest Utah Chapter of the Utah Native Plant Society.  CSU’s SUNCLF volunteer group is acting as a catalyst for this reactivation effort and is seeking a core group of native plant enthusiasts to help with:

1) Salvaging plants from construction sites for reuse in water-efficient landscaping.

4) Leading guided hikes on public lands to show people the beauty and wonder of our many native plants.

Stephen Trimble, editor of Red Rock Stories, was featured at the main CSU booth.  Red Rock Stories is a compilation of essays by three generations of writers speaking on behalf of Utah’s public lands and is the trade version of Red Rock Testimony, which was delivered to decision makers in Washington, D.C. as a limited-edition chapbook supporting the preservation of Bears Ears as a National Monument.  Thanks to Steve for choosing our event to launch this new publication. 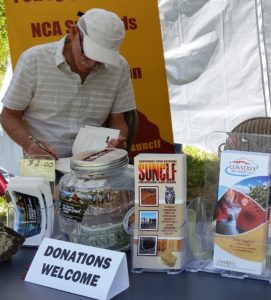