Click Here: LPP Update FINAL (a summary of the project 2017)

Cick Here: Risks of Depending on the Colorado River APRIL 2019 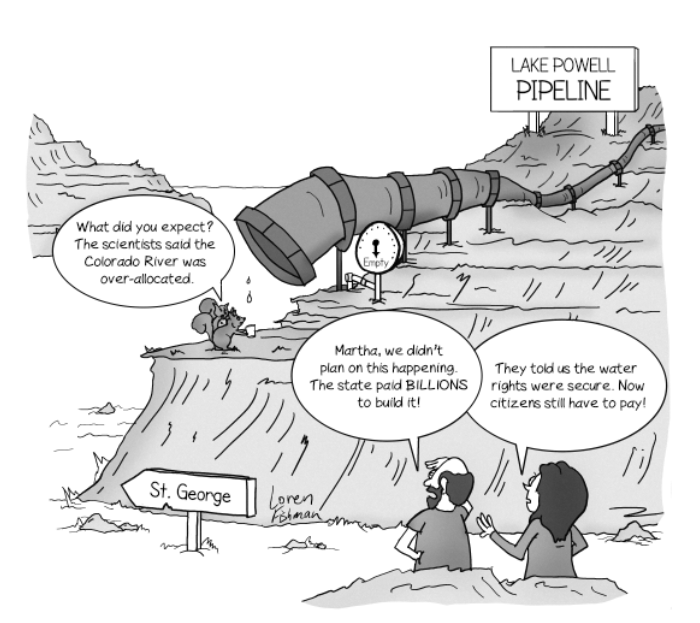 The Lake Powell Pipeline (LPP) spans 140 miles (map) from Lake Powell to Washington County, Utah. The State of Utah (Utah) wants to develop about 361,000 acre-feet of its remaining share of the Colorado River and a portion of this (86,249 acre-feet) is allocated for the Lake Powell Pipeline (LPP). But, there are risks depending on this remaining share because it may not be present in the river system due to: increased use; reduced snowpack and streamflow from rising temperatures; over-allocation; junior priority of LPP’s water right; and unsettled Federal Reserve Water Rights claims. Utah’s Colorado River water rights are not fixed and as water availability goes down so does its allocation. Utah’s allocation is 23% of what remains after senior water rights holders are met.

The laws that govern the Colorado River have allocated more water annually than the river produces. This is an economic risk that Utah has ignored and is not addressed in the Lake Powell Pipeline studies.

Since 2002 the average water demand already outstrips average supplies. Read more on the Colorado River Water Supply and Demand Study. Investing billions of dollars into a project that may not produce water in the future is a financial risk not worth taking. The state is not considering this economic risk. Using water more efficiently and water conservation measures are the least expensive option.

We have heard a lot of talk that Utah must hurry to use all its Colorado River rights or the Lower Basin states will take it. But, Utah may have already be using its share because of less water supply.

The State of Utah and Washington County Water District keep pushing for this pipeline project despite its high cost and apparent lack of real need. Washington County continues to be the west’s most wasteful water user and can do far more to use water more efficiently. Initial project costs were estimated at $186 million and have now skyrocketed to over billions of dollars. Our small communities cannot afford the Pipeline. The entire repayment burden will fall on the shoulders of Washington and Kane County residents. The residents have a right to know how much they will pay in higher impact fees, surcharges, and taxes for the proposed Lake Powell Pipeline before the project is approved. With a project of this size this lack of transparency is troubling.  In their 10 year $35 million study, these questions are still not answered and will not be answered. The Water District has also failed to explain how they will be able pay the high annual payments to the state.

How Will Washington County Pay?

Impact fees are already some the highest in the state and builders are not building affordable housing. This situation will get worse with higher fees from the Lake Powell Pipeline. Under the current plan, every family or business that buys a building permit would pay for the Pipeline through impact fees. The Water District assumes growth and impact fees will pay all the costs. But, to cover any shortfall in impact fees, the Water District also imposed a Water Development Surcharge ($1.75 per month) on all residents of cities that signed their Regional Pipeline Agreement. This surcharge can be increased at any time to protect the district’s bond rating. We also pay for water in our utility bills and pay again in our property taxes. The debt will fall on all residents to pay for the Lake Powell Pipeline.

According to a 2019 state AUDIT: Washington County already has the second highest water impact fees in the state; its ability to charge even higher fees is a key assumption for revenue growth to pay for the LPP. But, planned increases will nearly double the fee from 2018 to 2025. A model assumed that Washington County Water Conservancy District (WCWCD) will carry out its planned increases in impact fees from $9,417 in 2019 to $15,448 by 2026 as planned. While they cannot project what the highest impact fee will be, it will likely increase once the final cost of the LPP is determined. After 2026, the models assume the fee will gradually increase. If construction starts in 2025 the estimated cost of $1.4 billion with just inflation also grows to $24 billion.The ability to raise rates will affect the WCWCD’s ability to repay the loan. The revenue sources are susceptible to future uncertainly. The LPP ACT does not fully define how the state will be paid back for the full cost  of the LPP and may to be clarified.  Since all the costs of LPP our not known the ability of WCWCD to be able to pay the loan payments could significantly change.

The increased water rates coupled with population growth rapidly increases potential revenue.But, it there is recession that could cause problems with paying the payments.

A discussion about the Lake Powell Pipeline at Dixie State University.

A former Director of the Utah Division of Water Resources said if people would change their landscaping the Lake Powell Pipeline would not be needed.

Washington County is not running out of water.  The Water District’s own report to FITCH a credit agency; the Water District explains it has plenty of water. The Water District is only counting a small amount of the existing water supplies.  The Utah Division of Water Resources’ reports show there is more water in Washington County than the Water District identifies: more agricultural water, more water rights held by private land-owners, more water yield of existing water projects. Other options for future supply include: common sense cheaper alternatives such as, water pricing seasonally raising prices in July, water budget rates, metering all water use, landscape ordinances, more reuse, using more recycled water, treating ground water and storm water capture.

To justify the need for the Pipeline the Water District’s forecast for water demand is artificially high. Their estimates incorporate  inaccurate and outdated water use data, unreasonably low estimates of the costs of the Pipeline and low estimates of future water conservation. Creating a standard to collect accurate baseline data of water use and supply is critical to developing more accurate future water demand projections. Steps are now being taken to correct the water use and supply data.

A less costly, achievable alternative should be studied in the EIS to meet future water supply demand and unfortunately it is not. Western Resource Advocates wrote a Local Waters Alternative (see Below). Water efficiency measures and  conservation reductions should be implemented across all sectors including residential indoor and outdoor use, commercial, industrial, secondary, agriculture, and institutional water use. A solution is for communities to start a water budget that has worked in other communities to reduce water use dramatically. We held a water sustainability workshop on how to create a water budget and read our information in water conservation section of this web page

Supply uncertainty arises largely from boom and bust cycles of population growth. The financial risks associated with these forecasts are greater if a single large project is built. The current approach to the Pipeline project could unduly commit residents to high repayment obligations if demand or costs are very different than projected. Washington County has some of the highest per capita use and the lowest prices for the water in the west. A higher priority should be on collecting accurate water use and supply data, becoming efficient in our water use first, by boosting local water supplies, increasing conservation, creating pricing strategies, and reuse that could result in significant cost savings and provide enough water for growth. CSU is not anti-growth; we are for fiscal responsibility and growing smarter without burdening the county with massive debt it can’t afford. Southwest Utah is blessed with many sources of local water that can be developed incrementally as needed, at a fraction of the cost of the Pipeline. The Pipeline is not the answer and is unsustainable over time. We should be pursuing a strategy of making our area more self-reliant by reducing water demand and developing new and unused water resources locally. These actions could contribute to a more reliable water supplies. Local water sources will deliver southern Utah’s future affordably and reliably, without burdening present and future generations with a massive debt and a water supply vulnerable to drought, litigation, political conflict, controversy, and uncertainty.

Governor Herbert created the Executive Water Finance Board to study the cost of the LPP. They have determined the LPP is a $1 billion state subsidy with annual payments of $80-120 million that will take funds away from other state needs. Click Here: https://www.utah.gov/pmn/files/444007.pdf.

Information on 2015 Governor’s budget that refers too the LPP.

Lake Powell Pipeline in the News